Daisy Weller Smith, one of the town’s most beloved residents, passed away this week and you can almost feel the sadness in the air. We didn’t know “Miss Daisy” personally, but many of our friends did, and her passing marks the end of an era. The front page of this week’s newspaper paid tribute to this “Grand Lady.”

Daisy Weller Smith died Monday, and along with her went a light inside Ten Oaks, the stately old home on Pelham Road in Jacksonville.

Smith, 89, had lived in the house — the former home of her grandparents, then her parents —  since 1949. She had, since 1999, shared the home with the law office of attorney Joseph Maloney. Smith had been staying at a Jacksonville nursing home since June.

When contacted, Maloney declined to comment on her, saying he is “too close.”

Penn Wilson, a lifelong friend of Smith’s, recalled her love of fishing, and described her as a “renaissance woman” with a fondness for art and for dressing well.

Wilson recounted the story of a deep-sea fishing trip Smith and her father took Wilson on to Destin, Fla., in 1968.

“It was a wonderful experience,” Wilson said. “We caught 28 king mackerel. It took a long time to use those fish.”

Smith’s love of Ten Oaks was such that, when a new bishop of Alabama’s Episcopal churches was chosen, Smith offered her home to entertain him, Wilson said.

“And the bishop was entertained extremely well. “The ladies of St. Luke’s, they just pulled out all the stops and had a wonderful welcome reception for bishop,” Wilson said, referring to the Episcopal congregation in Jacksonville.  “She loved that house.”

Richard Lindblom, also a longtime friend of Smith’s, described her as “a grand lady of the Southern style.”

“And she was a lady,” Lindblom said.

She loved the Atlanta Braves as well, Lindblom said. If one were to invite Smith over for coffee after church, and the Braves happened to be playing at the same time, Smith would chose the baseball game, Lindblom said.

Smith grew up in Birmingham and Atlanta, but moved to Ten Oaks as a teenager with her parents, Thomas and Anne Smith. Her mother died in 1960 and her father followed in 1973. She had few other living relatives, according to those who knew her, but Smith had plenty of friends.

Smith had worked at First National Bank of Jacksonville, which became AmSouth then Regions bank, for many years. She attended the Parsons School of Design in New York City, and was a lifelong lover of art.

Elaine Hardison met Smith in 1960, when Hardison moved to Jacksonville.

“And I was never with her that we didn’t laugh and have a grand time. She lived a long, full and brave life and she helped others to do the same,” Hardison said.

“And then she’d say ‘sing, Mr. Peabody,’ and he would cry out like dogs do,” Hardison said.

Phil Sanguinetti, former publisher of the Jacksonville News, said that Smith was one-of-a-kind.

“She was one of the finest ladies I have known,” he said. “She will certainly be missed by this community.” 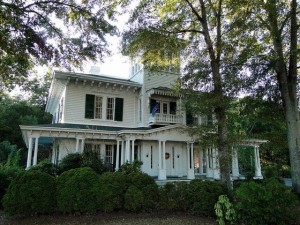