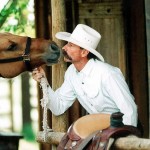 Baxter Black, aka The Cowboy Poet–philosopher, former large-animal veterinarian, radio commentator, columnist and author–has a new book out this year, Lessons from a Desperado Poet (or How to Find Your Way When You Don’t Have a Map). Here’s one of his most recent columns from the series, “On the Edge of Common Sense.” This one’s about rodeos, specifically Cheyenne Frontier Days–the largest buckin’ bronco party in the US of A.

Baxter Black: On the Edge of Common Sense

Rodeo as a spectator sport has been growing in attendance. Maybe it is because it is live-action, close to home, reasonably priced and rated PG. NASCAR has a similar appeal. As rodeo moves into the ranks of other professional sports, you notice a consistency in the show. The Professional Rodeo Cowboys Association runs a tight ship.

Most of the excitement comes when a tie down roper puts one down in 7.6 seconds. Or when a ranking saddle bronc rider makes a classic ride. Or a barrel racer wins by 1/100th of a second! In other words, when a champion shows you how it’s done. 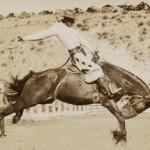 Imagine the tie-down roper tense in the box. He nods for his calf. The chute opens, the roper’s horse quivers, the rope is buzzing, everyone is holding their breath … and the calf strolls out, lazily. Meandering into the arena, looking at the crowd, imagining his mother is out there somewhere, seconds tick by … then he crosses the magic 30-foot barrier and the wheel comes off the wagon! 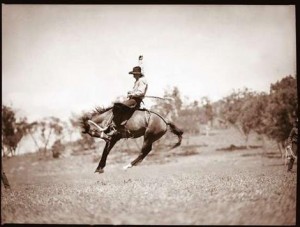 Their steer wrestling event is even more exciting. The dogger nods his head. He and the hazer, wound like springs, watch the big steer break out of the box like he’s got heel flies in his pants! They wait the interminable microseconds. By the time the steer hits the 30′ barrier he is going at the speed of beef! It takes our fearless cowboys another 20 or 30 yards to catch up. The questions arises, “What does it feel like to push your horse into a dead run, flat out, nostrils flaring, tail flying and jump off him into a four-legged horned calf-skin torpedo weighing 600 pounds?” Imagine standing on the hood of your car, getting your buddy to get it up to 35 mph, then reach out and grab a telephone pole!

Talk about exciting! It was like watching the Hulk tackle Shrek’s donkey!

Suffice it to say that each performance ended with the Wild Horse Race. What else did you expect? When you took one look at those characters entered up, they made the Pittsburgh Steelers defensive line look like fashion designers for Dancing with the Stars!

If you’ve heard the term “Cowboy Up!” Cheyenne Frontier Days is how you spell it! 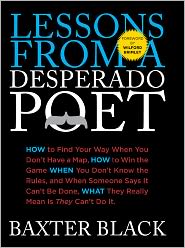 Into the Light
Are you a two-sided southerner?
At Heart, A Rural Poet
New Discoveries