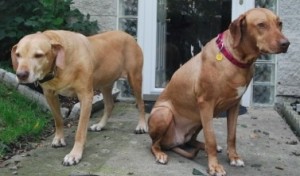 Meet Henry and Elsa, two Rhodesian Ridgebacks who came up through the kennel of hard knocks but managed to find their happy ending. Henry, who’s almost 8, was rescued by Rhodesian Ridgeback Rescue. He was abandoned in Texas, spent four years in foster care, met up with a kind lady in Iowa who took him under her wing, then landed a permanent gig in a groovy Chicago neighborhood called Bucktown. We’re told his swagger and rugged good looks are the envy of bouncers everywhere and that ole Henry is equal opportunity cute: both men and women sigh and make googlie-eyes when they see him. Elsa, 7, was picked up by Ridgeback Rescue of the United States and, after being shipped around to lots of homes and foster families, she too landed in Bucktown, just this week. According to her owners, the girl has a quick eye (and nose) for all types of urban wildlife. She’s yet to take a road trip with her new family, but with her russet-red hair and sleek good looks (like a New York fashion model, only healthy!) everyone’s expecting she’ll earn dozens of admirers. And so begins the next chapter — better yet, a new beginning — in the lives of Henry and Elsa. Lisa and Bill, their faithful companions, promise to keep us posted. 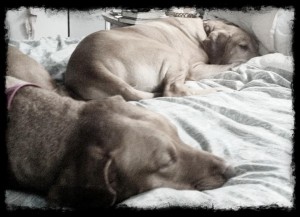