Our friend Jessica does things her own way. So when she told me she was buying a foreclosed, run-down, atomic ranch house in one of Atlanta’s most historic neighborhoods, well, I wasn’t the least bit surprised. What did surprise me, however, was how fast I, too, fell in love with the place. Designed by noted architect J.W. Robinson, her home, located in Collier Heights, was once owned by a Motown Records executive, in a neighborhood that became a symbol of Atlanta’s rising African-American middle class in the Civil Rights era. Collier Heights gained status on the National Register of Historic Places a few years ago — primarily for three reasons according to local historians: it served as home for many Atlanta Civil Rights-era activists, it had the distinction of being 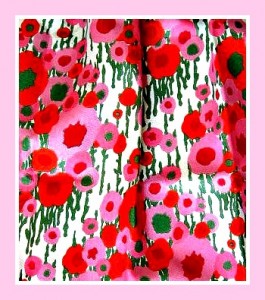 an African-American community planned and developed by African-Americans, and for the architectural significance of its many different examples of Mid-Century houses. In Atlanta Magazine writer Betsy Riley noted, “The heyday of ranch architecture was an era of optimism and experimentation. Whimsical flourishes such as sunburst steel doors, decorative brick or concrete screens, hidden built-in panels and drawers, and ribbon windows abound in Collier Heights.” Jim Auchmutey in AJC Homefinder added, “Collier Heights is an expression of the city’s vaunted black middle class every bit as much as Auburn Avenue or the Atlanta University Center colleges.”

“When I bought the house, so much of it was still original I decided to restore it back to 1962. So every appliance, sink, toilet, light fixture, piece of furniture or accessory I’ve bought or found has come from the 1960s. I have a complete encyclopedia on decorating from the ’60s and it’s my bible — and a bookshelf filled with vintage decorating books.”

Jessica gave us a tour of her loving restoration project where she let us snap a few photos. Mike got so excited walking through the house that he was tempted to run back home and grab his toolbox. 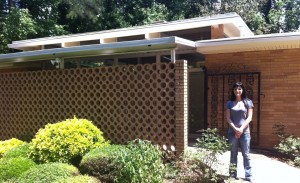 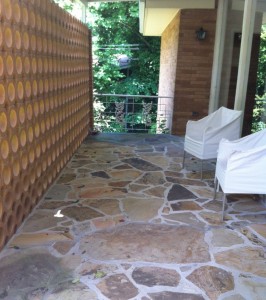 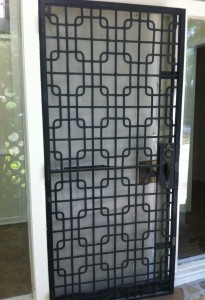 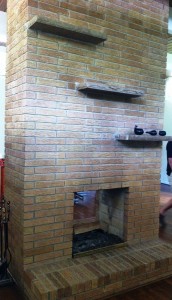 Double-sided fireplace that soars to the vaulted great room ceiling and extends down into the huge basement. 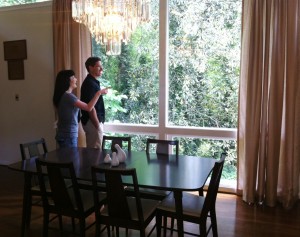 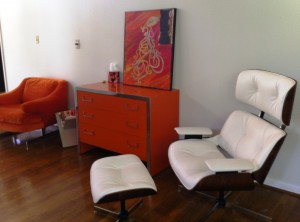 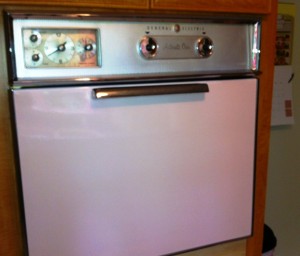 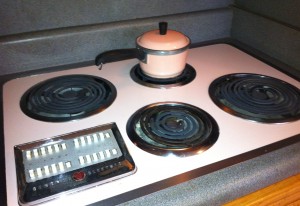 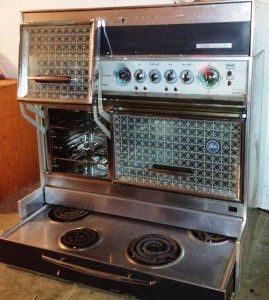 So cool. An original Frigidaire Flair found in Alabama.

The Flair Motto: It’s the happiest thing that ever happened to cooking… Or you! 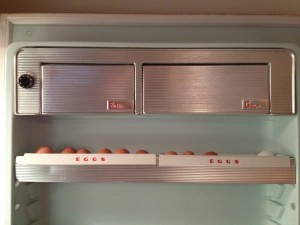 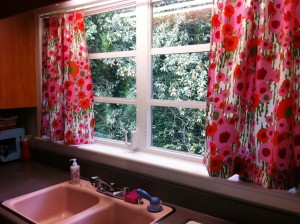 Pink flower cafe curtains made of fiberglass. Made for Woolworth and bought on Etsy.

They arrived in their original 1960’s packaging.

And that pink sink? She traded a toilet for it (from a cute Olympic cyclist). 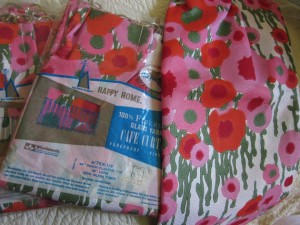 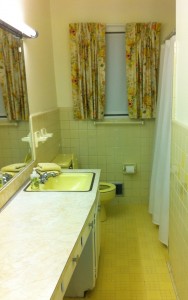 Jessica’s favorite bathroom, with all original yellow tile and fixtures. 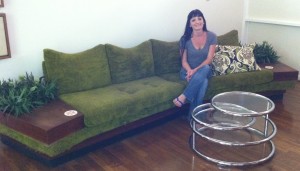 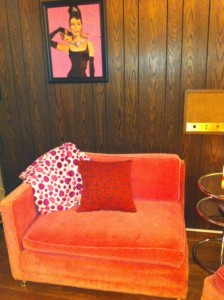 Sectional sofa bought off Craigslist from a hipster. 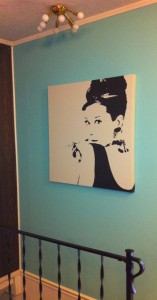 Image of Audrey from Jessica’s favorite film, “Breakfast at Tiffany’s,” are featured throughout the home. Showcased here on a wall painted Holiday Turquoise from Sherwin Williams’ Mid-Century paint color line.

The sputnik light above was a housewarming gift to herself. 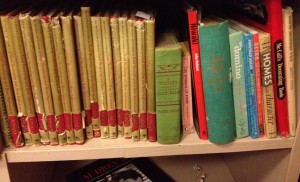 More Cucumber Inspiration: Tzatziki
Aha!
Into the Light
Are you a two-sided southerner?