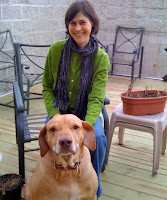 I met Lisa Bertagnoli early in my career. She was a rising young writer in Chicago working for a national restaurant magazine. I was just starting out in PR, pretending like I knew what I was doing. We became fast friends, and over the years have had some fun adventures and developed a friendship I treasure. This April, she’s coming for a visit. We’re going to see Arielle in Athens and then we’re off to the farm to kick back for the weekend. Lisa lives in Chicago’s Bucktown neighborhood with her husband, Bill, and their three rescue dogs: Henry, Rosie and Sammy. A journalist and author, her first book, Scarlett Rules (http://www.scarlettrules.com/), came out in 2006, the 70th anniversary of Gone With The Wind, and was featured on NPR’s “Weekend Edition” (to listen, click here: http://bit.ly/9EUQ4A).

She’s now working on her first novel. Her articles have been featured in Newsweek, Forbes, Readers Digest, Washingtonian, Chicago Tribune and Chicago Sun-Times, to name a few. But for the purpose of this blog, it’s important to note that Lisa is also a real foodie and last year tried to grow a little vegetable garden on her back deck in the Windy City. That experiment, well, wasn’t much of a success, at least not by her standards. Here’s her account.
The Summer of My Porch Pots
Lisa Bertagnoli
I’m a vegetarian. I love vegetables. I like to recycle and live low on the food chain and all that stuff. So I should be itching to own a farm, right? I should be one of those people who can’t wait to get her hands dirty planting, hoeing, weeding and whatever else farmers do, right?
But I’m not. As much as I love my vegetables, I do not want to grow them. That I will leave to the family farmers in Illinois, Indiana and Wisconsin who truck their home-grown goods to the Wicker Park farmers’ market every weekend.
I tried to be a city farmer. Last summer, I grew arugula, basil, chives and parsley on our 100-percent wooden, 15’x9’ deck, which is perched above our one-and-a-half-car garage. Tomatoes and other edibles were out of the question, unless I wanted to offer a free buffet to our neighborhood’s rodent population, and I did not. (Before you go “eew”: We live in a good neighborhood, but it’s urban, with restaurants and bars and houses set closely together. Where that trio exists, rats also exist.)
It started with good intentions – supporting the organic farm at my friend’s daughters’ school. The day my plants arrived, it was a typical Chicago spring day: cold, with driving rain. But I couldn’t wait to move them from their tiny pots to more spacious quarters. I knelt on the wooden deck and carefully lifted the plants from small pots to big pots, using organic soil that, according to the label, was especially designed for container gardening. Visions of home-made pesto and parsley-spiked tabbouleh danced in my head as dirt lodged under my fingernails. It stayed there for a few days, testament to my nascent farmerhood.
The sun shone full and bright for the next week, perfect for my babies to stretch and grow. Within two weeks I had enough peppery, flavorful arugula for a small salad, enough basil to make an uncooked tomato-and-basil pasta sauce, and enough parsley to snack on (I love parsley, even when it’s wilted on a dinner plate).
That was mid-June, and it was the height of my porch pots’ life. As summer wore on, the arugula leaves turned anorexic, growing slimmer and slimmer until they were as tiny as the Olsen twins. The arugula also flowered, sprouting delicate little cream-colored blossoms, which I snipped and put into vases.
The basil flowered, too, though I knew enough to de-flower it to prevent the leaves from turning bitter. The parsley spread out obstinately, with broad, flat yellow leaves on the bottom and spindly ones up top. The chives thrived – to reward their good behavior, I left them the hell alone.
Though I watered them faithfully and turned them this way and that as the sun patterns on the porch shifted, the plants never recovered. By early July I was buying salad greens at the farmers’ market again, and by August the plants really weren’t food. They were just decorations.
I told my friend Monica (http://www.lostrecipesfound.com/), an accomplished gardener and cook, about the plants. “It’s the soil,” she said. “You should try composting.”
Composting. In downtown Chicago. Rats, step right up to the free buffet.
“No, no,” she said patiently. “Vermiculture. You can do it under your kitchen sink.”
Worms. Under my kitchen sink. I don’t think so.
It’s mid March. The weather is turning windy and warm. Time to think about the porch pots. This year, I think I’ll stick to geraniums. And leave the arugula to real farmers.