Mike’s getting pretty good at designing and building chicken coops. This year, we might even try to get on the Urban Coop Tour. After a little dry spell, our fat red hens — Sam n’ Ella — have been stepping up egg production in the city, probably because they love their new house so much. And the new pad affords much more privacy for this egg-laying business. Plus now, the Danes can’t sneak into the nesting boxes to steal our breakfast. 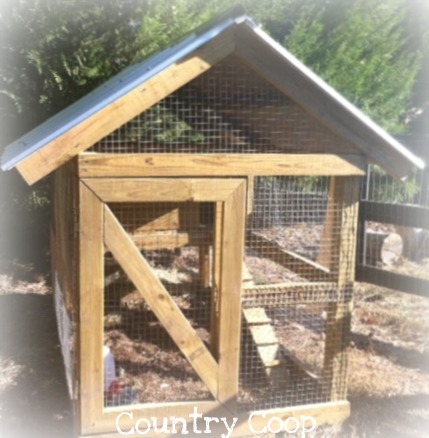 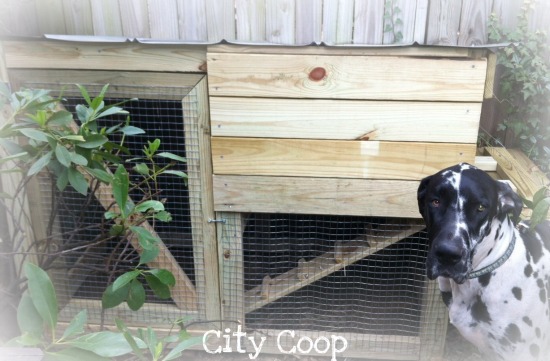 Thinking about getting some chicks? We’ll be happy to share advice, and tell you about all the things we’ve done wrong. And maybe Mike D. will build you your own customized coop. (Tip: He’ll work for beer, or a nice bottle of Cab.) 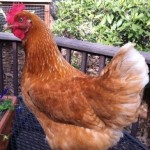 Why the new city coop with so much privacy and two locking doors? Because Sam, the bigger hen, decided to start nesting under the doghouse a few weeks ago, only we didn’t know it — at least not until the Danes managed to bury her under their house. We came back from grocery shopping one afternoon and only one chicken ran up to greet us (and if you haven’t seen a chicken run, YouTube it). Pretty soon we were frantically looking for the other bird, searching neighbors’ yards, driving up and down the street, calling for her like fools, and looking for any evidence we could — without so much as a feather to be found. Finally, we determined a hawk must have swooped down and got her and that poor Sam was gone for good. But then, a day or so later, Ella kept standing beside the doghouse calling out and we heard this faint, muffled sound coming from underneath. I yelled for Mike, who grabbed a shovel and starting digging out dirt and leaves, and sure enough that dumb bird had been stuck under the doghouse, with no food or water, for two straight days. And just what do you think we found lying next to Ms. Sam when we finally pulled her out? Three perfect eggs.