Ten years ago, our free-spirited friend Gena moved into one very old farmhouse on 115 acres in Jonesville, Va. Her dream of living in the country was finally realized but, sadly, also short-lived, because she found it just too difficult to make a living in such a rural remote area. But her memories of that time are lasting. Here are a few of her reflections from that special time in her life. 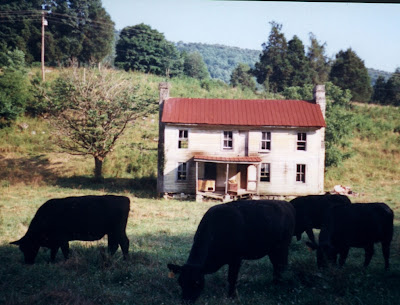 We bought 115 acres. I moved out of Atlanta because I thought that I could provide a better life for my little girl. We would bounce down the mile-and-a-half dirt driveway for our walk. We would walk up the mountain and pick berries. We laughed. We danced. We had a food co-op where neighbors, including a doctor and an ex-CIA agent who had also run to the hills from the city, traded produce and friendship. Our house was built in 1929. On the first floor, I once fell through some wooden planks in the kitchen and found dirt. It also took some time to figure this out, but remnants of fabric were left on a wall in the bedroom. Guess that was before wallpaper. In the beginning, I slept upstairs in a sleeping bag. Using the bathroom in the middle of the night was tricky, as you needed a flashlight and a piece of toilet paper to go to the hill. We bathed in the front creek and learned that we did, in fact, have neighbors. We enjoyed cows, daily deer, snakes, wild turkey and chickens…for a day. We quickly found out that chickens and dogs don’t mix. Lord, Lord, did we have blackberries. We love blackberries. To this day we have a difficult time buying them as ours were much better off the bush. I miss the farm.