A wonderful piece by Daryn Kagan from last weekend’s AJC. For dog lovers everywhere – but especially all you old dog lovers – this is for you. And to our own sweet Lola, it’s for you too. 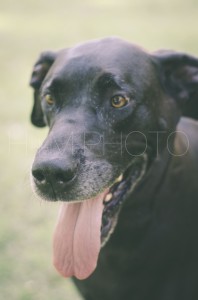 Many days she smells no better than an old blanket that’s been soaking in a bucket of sour milk for week.

Still, I look at her and know that I’m in love.

She is my 13 ½ year old dog.  Together, we’ve reached a bittersweet chapter.

Our story goes back to the year 2000.  I was single and living alone when my house was broken into.  Three days later, the thugs came back and stole my car off the street using a set of spare car keys I hadn’t realized they had taken.

The police shrugged their shoulders. “Lady, get a gun or get a dog,” was their big advice.

Since I’d never even held a gun, my choice was clear.

I headed to the Humane Society where I knew her the moment I saw her—a delicious ball of yellow fur rolling around showing off her pink belly. “Lab Mix,” the sign in front of the litter said.

“How very generous,” I’ve thought about that description over the years, realizing my dog is much more “mix” than “Lab.”

Turns out, needing some protection was just the excuse to lead me to one of the best relationships of my life.

We had Puppy Love, which is much like it sounds. A crush on someone who loves you instantly, unconditionally, and ultimately unrealistically.

That led to Teen Dog Love where I realized my dog wasn’t perfect,  needed guidance to stay out of trouble, but so fun because she was always up for adventure be it countless hours in the dog park, a swim in a river, or a trip to the beach.

And there’s been plenty of Full Grown Love, when it seems she has just always been here. She’s known me as the single career girl, met and sniffed out various beaus.

When I married last year, she effortlessly made the transition to  Family Dog, somehow charming my previously non-animal loving husband.  If we both are in the house, but in separate rooms, she makes a point to go lay by his feet, instead of mine. When I go check on them, she gives me that dog wink as if to say, “I got this.” My otherwise astute husband has no clue he’s been suckered into a special friendship.

My dog is 13 ½ now and I know our time together is shorter rather than longer. It’s in the way I give her back legs a boost to hop into the back seat of the car.  It’s in the way our three long daily walks have been replaced by one. She much prefers her day-long snoring snooze fest in her self-created cave behind the couch in the den.  It’s in the news that other dogs she played with in the park as a puppy have passed on.

I know in my head, the contract she signed to be on this Earth is shorter than mine.

Yet the idea of her passing on instantly fills my eyes with buckets of tears and makes it a little hard to breathe.

If you’re a person whose heart is being kept by a dog, I know you understand.

That’s why every chance I get, I drink in that stinky smell like it’s the world’s finest perfume and run my hands over her lumpy body.