People often ask us, rather bemused, if our dogs have ever hurt the chickens. And from stories we’ve heard, practically every household pet has attacked a friend’s chickens from time to time. But our three giant canines — Linus, Lola and Sammi Lu — have loved our chicks since day one. In fact, they approach them as part of the family…with more curiosity than aggression…even when the birds eat their dog food and camp out in their house. Last summer when we were traveling the chicks must have gotten all discombobulated with the changes in routine and started laying eggs in the doghouse instead of the coop. Michelle, who was farm sitting, said gathering eggs each day was kind of like an Easter Egg hunt. Yet despite three Great Danes sharing that big doghouse, we can honestly report not a single egg was broken. The beasts simply moved the eggs out of their way or pushed them into a corner. True story.

So we weren’t at all surprised by yesterday’s report from Tractor Supply of a Great Dane that has adopted a blind chick and its buddy. 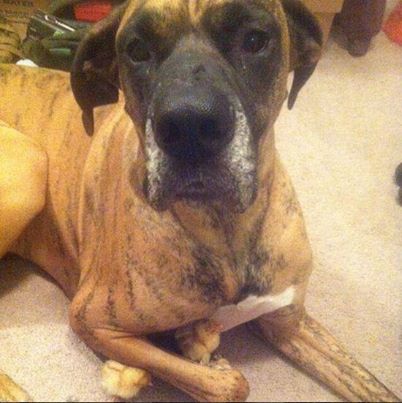 Jake and his chicks

Not every chick has it easy starting out, and not every mother is what you might expect. Take the story of Jenny and Jake…

“We take really good care of our chicks during #ChickDays at Tractor Supply. Today while feeding and watering before we headed out I noticed one little chick that wasn’t acting like the others. When I picked her up I noticed she was born blind. I knew the poor thing was probably starved and thirsty…so I filled a 3cc syringe with water and sav-a-chick electrolytes and she drank the entire thing.

Knowing that she would need to be syringe fed I boxed her and a buddy up and brought her home for the night to at least try and help her…well…sometimes all a baby needs is its momma…well in this case momma is my 170lb Great Dane named Jake who has taken the chick under his “wing.” 9ccs of a chick mash dinner and more water and they’re curled up under mother hen asleep…and he won’t leave them.”